Borders of ‘places’ should not be drawn from above but should be the endogenous result of a policy process inspired by partial cosmopolitanism.

Natural borders are made up of faults, ridges, rivers, seas, cliffs; In short, of the ruggedness of our land. Territorial borders and encroachments are made by animal species in adapting and modifying that unevenness. Borders, at times insurmountable, between opinions on values and what is right, simultaneously shaped by previous borders and source of other borders. And many more, products of our human constructs, of our coming together as communities around something shared or useful: families, communities, villages, towns, fiefdoms, townships, hamlets, alliances between municipalities, regions, macro-regions, empires, neighbourhoods, constituencies, and then, at some point, nations. Among and within all of them, one further border can bring life to democracy and help design policies aimed at social justice: the border within which citizens can contribute, through institutions and spaces of public debate, to build their own future of social justice.

I am not questioning national borders. This should be clear. I am taking note of two facts. First, the rising of strong territorial inequalities, produced by forty years of neoliberalism, means that marginalised areas throughout Europe are unable to escape their underdevelopment traps by their own means, i.e. through endogenous, democratic and market dynamics. Therefore, they require a ‘place-based policy’. Second, this policy and the building of a vision and a development strategy for these areas, making the most of their embedded knowledge, requires the definition of their ‘borders’, establishing which citizens, social or private organisations and public institutions should contribute to it and on which natural and cultural resources they can rely on.

In addressing the ‘border’ issue, let’s move from the same question that was posed in the modern age for the borders of nations, or in Etienne Balibar’s words, for those social constructs that are “represented in the past and in the future as if they were a natural community”. So, what criteria should be used in drawing national borders? Should homogeneity or heterogeneity be sought within them? The alternative comes to light with clarity in the clash between anti-federalists and federalists that characterises the creation of the United States of America.

The anti-federalists argued that a virtuous and just state requires complete religious and ethnic homogeneity in the population and that, to ensure this, excessive territorial extension should be avoided. This is a vision of a closed community. The federalists, instead, believed that there is only one way to ensure peace and freedom and to erect a dam against the quarrelsome and authoritarian degeneration of factions: to build a state so vast and heterogeneous, so inclusive of religious and economic factions and every other identity and interest, that it becomes extremely unlikely that one of them or any alliance among them will dominate. This is a vision of an open society. It seems attractive, but beware: the explicit goal is the ‘divide and rule’ of the wealthy classes, the division of society into many different interests and parties in order to protect an ultimate value against which the factions always turn their attack: the ‘different and unequal ability to acquire property’ or the ‘unequal distribution of wealth’ (cfr. J. Madison, A. Hamilton, J. Jay, The Federalist Papers, Penguin, 1987, with the introduction of Issac Kramnick).

Between a closed and self-referential community and an open society dominated by the wealthy, a third option has made its way across the history of democracies. A solution that humanity has pursued with great effort. Kwame Anthony Appiah sums it up in the concept of ‘partial cosmopolitanism’ or we might say, open communitarianism. Appiah (Cosmopolitanism, Penguin, 2006) moves from two instinctive feelings, both to be embraced: to be and feel as citizens of the universe; to feel, each and every one of us, a sense of loyalty and a community bond with those closest to us in the multiple dimensions of our being and acting. Therefore, we have a principle on the basis of which we can seek the borders of a place-based policies aimed at marginalised places.

Borders of ‘places’ should not be drawn from above but should be the endogenous result of a policy process inspired by partial cosmopolitanism. Policy makers (the European Union, the States and the Regions) will first set general strategic missions and sectoral open-ended guidelines, to be adapted to contexts. On this basis they will then entrust municipalities with decision and implementation power, by setting the following rules of the game. On the one hand, a heated, an open and informed public debate will be promoted at local level among all citizens (as I illustrate in ‘Place-based policy and politics’, Renewal, n.1, 2019): it will bring to the foreground and then test loyalties and community ties through the very ability to invent and propose a ‘common vision of the area’. On the other hand, policy makers will ensure openness, i.e. that in such public debate all relevant external points of view are called in and taken into account: those of the competence centres of private and social enterprises, of national universities and of diverse cultures. Maps describing natural, social and economic borders for all dimensions of life will be an input, not a constraint, of such process.

Suitable borders will then emerge through this process, as those borders which ensure a ‘common vision’ within them and the willingness and capacity to pursue it: the borders of the alliance of several municipalities in a vast area; the borders of the alliance between two or more neighbourhoods within a medium or large city. Once the Union, the State and the Regions have recognised those borders, it will be up to this newly drawn place, emerging endogenously from the heated and open debate within society – not decided by experts or administrators – to develop a strategy and to implement it.

Fabrizio Barca*: Economist, former head of the Research Division of the Bank of Italy, of the Department for Development and Cohesion Policies at the Ministry of the Treasury, and general director of the Ministry of the Economy and Finance. He was Chairman of the OECD’s Committee for Territorial Policies and Minister with delegation for territorial cohesion in the Monti national government.. 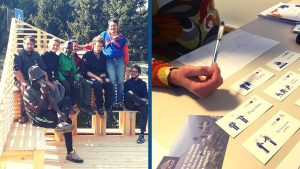